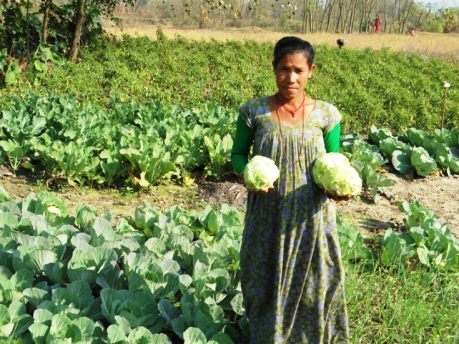 Bikramiya Chaudary, 45 years old, is a pro poor farmer of Chitwan district of Nepal. Her family is food sufficiency below six months from their own production. For remaining months and for other expenses they are compelled to go to landlord or outside the village in search for daily wages. She was involved in the group under the program “Efficient Land Management for Socio-economic Enhancement in Southern Nepal” implemented by MRC Nepal in the financial assistance of OPEC/OFID.

In the technical and input support of MRC Nepal, she was ready to grow vegetable crops on her marginal fallow land near to river bank. Initially, she grew cauliflower, chilli, tomato and cabbage on her 1008m2land and able to fetch good price from that. Within shortest period of time she was able to earn about NRs. 36,000 (equivalent to NRs.360,000 per Ha/ \$ 4045 per Ha).“I have never expected such type of crop and income from this fallow land”, she expressed her happiness while the monitoring visit made from line agencies. With the success of her first crop, she was excited and has expanded the area under vegetable cultivation.

The increased income is invested in household expenses and children education. In her own word, she says, “My husband assist me in vegetable farming and don’t go for daily wages any more”. She further added that, “I am in the learning phase of vegetable farming, so support should be continued at least for another two-three years so that I will become a commercial farmer and self reliance”.